I heard one of my favorite Bruce Springteen songs on the radio yesterday and it still gives me chills – “The Ghost of Tom Joad”  with guest Tom Morello.  The video can be seen here and even though I’m not a big screeching guitar fan, the guitar solo at the end is insanely incredible.  http://www.youtube.com/watch?v=B-c6GphpAeY&ob=av3e

A couple of years ago the photo editor at the Sun Times News Group asked me if I wanted to go shoot a rock star.  I emphatically said “Yes!  Who?”  He said “Tom Morello”  and I was like “Who’s that”?  I had heard of Rage Against the Machine but I did not know of Morello’s fame.  I was glad because it made me less nervous about the assignment.  He was in town promoting SEIU union workers and finishing up one of his tours as a solo artist.  I was to photograph him at the home of a daycare in Bellwood, Ill.  He was going to come and help feed the kids snacks, and help with the general needs of the daycare.

Even though he showed up with a small entourage it was actually a refreshing PR situation.  No ribbon cuttings or fake handshakes, just Tom and crew helping out.  I was just about ready to leave and I thought “No, just stay a few more minutes, you never know what will happen”.  About 2 minutes later he announces that he’s going to the backyard to play for the kids.  I just remember thinking “Wow, I’m shooting a rock star tuning his guitar in the backyard surrounded by kids toys – so glad I stayed.”   As if that weren’t great enough he says, “Oh, here comes my friend Ben Harper, he’s going to join me,”  and Ben Harper walks around the corner.  They proceeded to play a little concert for the kids while sitting on toys.

Mr. Morello was incredibly nice and genuine and even though I know I am to remain calm and dispassionate, it was just a  tad hard.

When telling this story, another  photographer once told me that I was too distracted by “the shiny object”.  Actually it wasn’t the rock star that was so great, but it was shooting someone out of the “rock star element” that made it so exciting for me.    Secondly,  it doesn’t matter if I’m photographing a teacher, a kid or an office worker,  it’s all shiny to me. 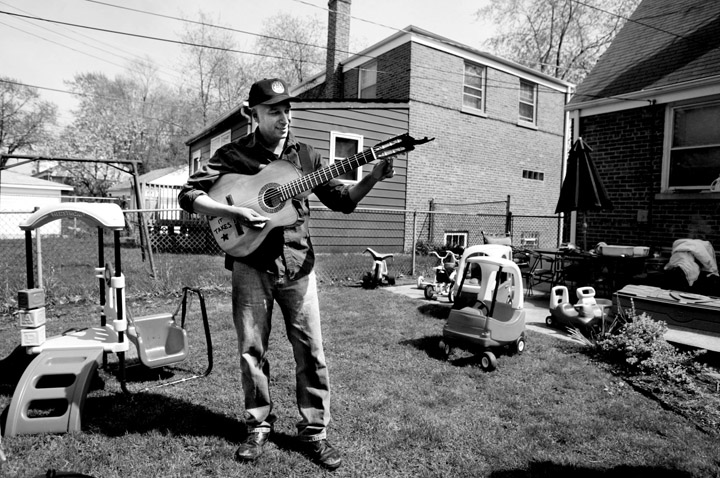 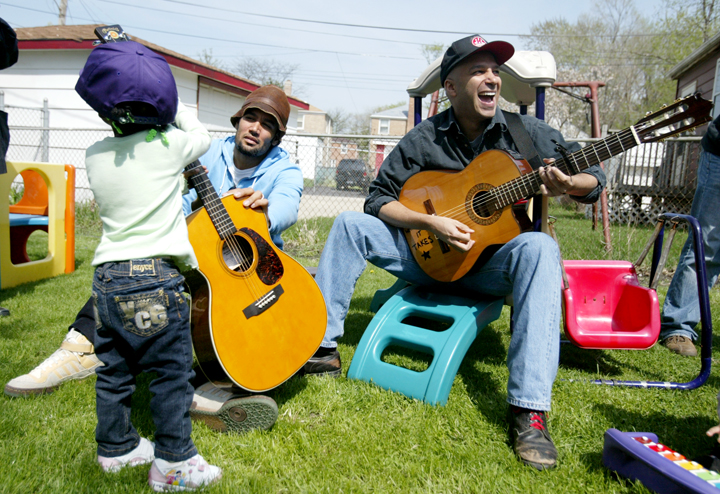